Blasting Knowledge is reinforced in our Institution

The Chamber of Mines of Peru explains how to reinforce the bedrock stability using different techniques. 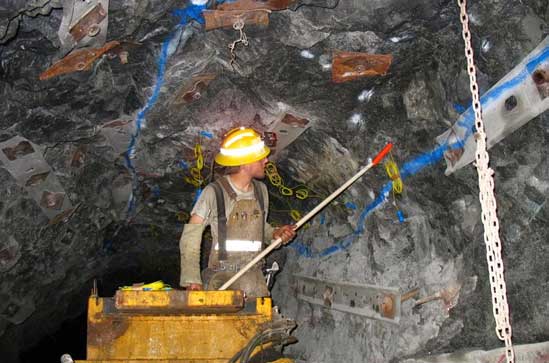 The Chamber of Mines of Peru, organization that strengthens education in the sector and ensures the optimization of mining activities. In the following article, knowledge of smooth blasting will be reinforced through tools that we will present. In addition, the experience of the specialist, Ing. Navarro Torres, will contribute to developing the following institutional press release.

Our expert said the following, «Smooth blasting lies in using low-power linear explosive charges. They are placed in holes very close to each other and they are detonating simultaneously in order to create and control the formation of a crack or continuous break plane. Among its advantages we can mention that it produces less cracking in the remaining rock, which contributes to improving excavations.”

The most applied smooth blasting techniques are precut blasting, trim blasting and buffer blasting. The first one lies in creating a discontinuity or fracture plane (continuous crack) in the rock before conducting the main blasting. This is performed through a row of small-diameter holes distributed nearby with decoupled explosive charges and instantaneous shots.

The specialist of the Chamber of Mines of Peru, engineer Navarro Torres, strengthened the concepts by saying that the trim blasting technique is similar to the previous one, since it uses holes close to each other with decoupled charges. However, the great difference is that it is used after conducting the main blasting. Finally, buffer blasting is a traditional blasting.

Last rows of holes were changed with small explosive and decoupled charges. Moreover, shot is made in a single stage. This technique, also called cushion blasting has increased its possibilities with the development of new processes such as ADP (Air Deck Prespliting) and the development of special low-density charges, of Examon-R or ANFO type combined with polyethylene prills.

The use of smooth blasting is not only applied to underground projects, but also to surface operations. As an example of this, we can say that in 2015, Sociedad Minera Cerro Verde (Arequipa, Peru) used the precut blasting technique in order to improve the slope stability and integrity of final walls.

This method was applied to this open-pit activity and the outcomes were satisfactory, since a stable wall was obtained. When vibration is measured, the effect of shot vibration was filtered out to the order of 54%. The persons in charge of this analysis concluded that although this technique is expensive, it is also very beneficial for economic and safety reasons, since it contributes to recovering large amount of ore and keeping slopes more stable.

Blasting optimization is of such importance for the mining industry, both from the point of view of operations safety and economic performance. Additionally, up-to-date and reinforced knowledge of smooth blasting is necessary to conduct excellent mining operation.

Moreover, constant efforts made by companies to improve the specialization level of their workers should be highlighted. For instance, in May 2015, the Mining Cluster of Zacatecas, Mexico (Clusmin) conducted the workshop called Basic Principles in the Use of Explosives and Safe Blasting in Modern Mining.